In a UNC Planning class during my senior year, our professor tasked each student with the same mission: redesign an existing intersection and street in Chapel Hill to prioritize all users, not just cars.  To brainstorm ideas, my group went and tried to cross our assigned six-lane intersection at the crosswalk signal. While crossing, a car turning right on red almost slammed into us and the “Walk” sign turned off well before we fully crossed.  With a newfound sense of urgency, we started redesigning the street with amenities to help pedestrians and cyclists of all ages and abilities have a better experience.  I’d never felt a class project’s importance so clearly before.

Through LFNC, I’ve graduated from class projects. I now add my voice to real designs and plans for safer and more accessible streets for everyone in Spindale. On a regular Tuesday morning this fall, I participated in a 15-person meeting about town intersection improvements with representatives from Spindale, the county, and the state.  By the end of the meeting, I realized we had made decisions that would positively affect non-automobile users for years to come.

Designing streets and transportation networks to prioritize all users is the force behind the nationwide Complete Streets movement.  America’s unfortunate obsession in past decades was to design roads solely for cars, leaving any other street users to fend for themselves.  The walking experience in many American towns deteriorated into conditions that were uncomfortable, unsafe, and boring. What walker wants just to look at long stretches of gray concrete? Not this Walker!

In small towns like Spindale, Complete Streets policy can be the foundation for a gradual return to the “20-minute village” idea, in which people can accomplish all their daily activities within a 20-minute walk.  There is precedent for this. When Spindale was a booming mill village during most of the 20th century, walkability was quite high, as people had safe paths to the textile mills, groceries, and pharmacies.

When I studied abroad in Germany, I found myself often drawn to those idyllic small towns often found on postcards. Inevitably, I would spend those days safely and easily walking through town streets designed for all users to safely coexist. It was clear that a citizen could buy groceries, walk their kids to school, or meet friends at the local coffee shop well within a safe twenty-minute walk.  Tidy and comfortable public spaces scattered nicely in town made the walk actually enjoyable too.

So, as the number of pedestrian traffic fatalities continues to rise in North Carolina, there is considerable room for towns in this state to emulate walkable towns like those I found in Germany.  We should do this by investing in Complete Streets policy for citizen safety and well-being.

As we in Spindale push forward in 2020 with a large investment in our downtown streetscape, we are utilizing Complete Streets concepts to prioritize walkability and the accompanying public health, economic revitalization, and environmental benefits.  We’ve opened a new greenway paralleling Main Street in Spindale, offering a plethora of possibilities for citizens to easily walk to schools, grocery stores, and downtown businesses.  Spindale’s commitment to walkability even got me an audience with a group of federal legislative staffers visiting Chapel Hill, as I presented on how Complete Streets policy manifests in small municipalities.

For decades, the question in transportation has been “how many cars can we move down the street.”

Here’s to continually changing the question to “how many people can we move down the street.” 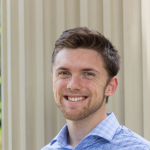